Arvada's first "fire engine house" was located on property leased from the C&S Railroad, not far from the water tower that serves as Olde Town Arvada's most distinguished landmark. The engine house was nothing more than a small shelter designed to protect the engine from frost.

A group of volunteers known as the Arvada Fire Company was established early in 1908. By the fall of 1909, these volunteers were equipped with a ladder, 100 feet of fire hose, two hand axes and six lanterns, in addition to 14 portable fire extinguishers and the Rex chemical engine purchased in 1907.

On May 10, 1910, the town board authorized the purchase of Arvada's first hand-drawn fire hose carts. The specifications called for two carts equipped with automatic gongs and wheels that stood more than five feet tall. The carts were also "handsomely 'painted in vermilion" and equipped with polished brass hub bands. Each cart weighed 500 pounds and had a hose capacity of 750 feet.

On December 11, 1911, Arvada's hose companies consolidated and recorded the formation of the Arvada Fire Department. At that time, Arvada consisted of about 840 residents and enough small businesses to provide townspeople with essential goods and services. Martin Klumker emerged as fire chief following consolidation of the hose companies. Klumker was a 33-year-old blacksmith who immigrated to America from Germany at the age of 8.

The early Arvada Fire Department was funded primarily by appropriations from the town board and profits from dances held on the second floor of the First National Bank building. A successful dance could add $20 to the department treasury.

Klumker served as AFD's chief until April 21, 1913, at which time Arthur Kaler was elected chief. During Kaler's term, the department documented rules of order and operating by-laws, many of which endured until the department dissolved in 1999. Kaler served one year as chief and eventually left the department after enlisting in the Army during World War I. 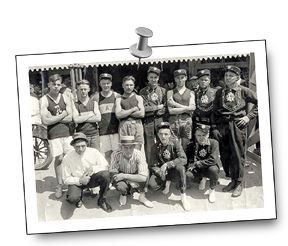 The early department made tremendous progress under the direction of Edward Louis Richter, a hard working "home town product" who was elected chief in 1914 at the age of 23.

One of the first significant fires to occur during Richter's term broke out on September 15, 1914. A church bell was sounded to summon assistance after Millie Graff accidentally dropped a match in a closet while looking for her night robe. Bucket brigades were formed as wind whipped embers from the Graff home toward adjacent structures. Firefighters and townspeople prevented the fire from spreading to buildings nearby, but could not spare the Graff home from destruction.

Records show that friction between the fire department and the town board began to develop in 1917. This feud culminated when Chief Richter and four firemen held a special meeting, divided up the cash on hand, and disbanded. Richter and his men walked away from the meeting with $7.65 each. Official minutes from the August 29, 1917 meeting read "Died. No Flowers."

Two months later, the department again reorganized under Chief Richter. According to a local newspaper article, "about twenty of the sturdy young men of the village enrolled their names as active fire fighters, while a number of the older heads like Senator Saley, Mayor Richard Russell, J.C. Munal and the editors of the local papers enrolled to give dignity to the organization on state occasions." Provisions for participating in the state volunteer firefighters' pension fund were completed, and the firemen also joined the recently organized Colorado State Firemen's Association. George C. Townsley, Sr. and William T. Olson, Sr. each served as fire chief between 1921 and 1924. Townsley was employed by the Town of Arvada in a number of capacities. Olson operated a successful lumber company that later traded hands and burned to the ground in an incident during 1960 that still remains one of Arvada's most devastating fires.

In 1924, the department faced yet another reorganization. The reorganized department operated under Chief Ira "Dutch" Winger for the next 14 years. Winger and many other Arvada firefighters were employed by the Arvada Electric Company. During Winger's term, the department evolved from hand-drawn to motorized fire apparatus. 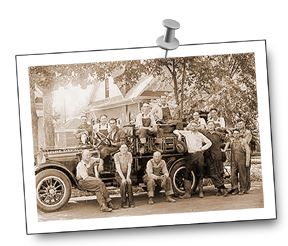 Arvada's first motorized fire engine was a 1923 Graham Brothers chemical engine purchased in Denver from the Julius Pearce Fire Supply Company. The "Old Dodge", as it has been dubbed by firefighters, can still be seen traveling the streets of Arvada, although its use is restricted to parades and other special events. 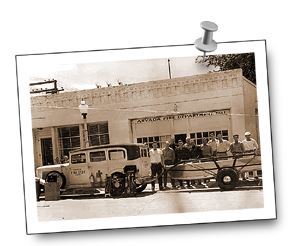 Arvada's first ambulance began operating in 1939 under the jurisdiction of the Wilmore-Richter American Legion Post Number 161. The fire department acquired the ambulance in 1947 and began providing first-aid and rescue services to the Arvada community.

Two years later, local citizens went to the polls and approved the formation of the Arvada Fire Protection District. The formation transferred control and financing of the department from the Arvada City Council to a board of directors consisting of five elected officials. The first members of the board were Thomas C. Lively, Alvin E Stout, Paul Harkness, Benton G. Kinkel and Albert Jeronimus. The board's first meeting was held on May 24, 1949. 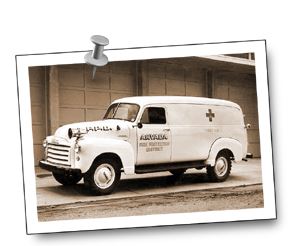 1953 also marked the district's first employment contract. The board hired Elizabeth Schmitt to receive emergency telephone calls, sound the department's outdoor siren, and then telephone the firemen with the location of the emergency. Mrs. Schmitt worked from her home at 5701 Zephyr Street and agreed to be available at all times for a monthly salary of $150.

"Fritz" Sedlmayr served as fire chief longer than any other man in the department's history. During Chief Sedlmayr's term, the department roster tripled in size and fire stations were erected at 7900 W 57th Avenue, 12205 W 52nd Avenue, 7300 Kipling Street, and 6845 W 68th Avenue Chief Sedlmayr was regarded as "one of Arvada's most dedicated public officials" in a newspaper article published in 1967 near the end of his 16-year term. 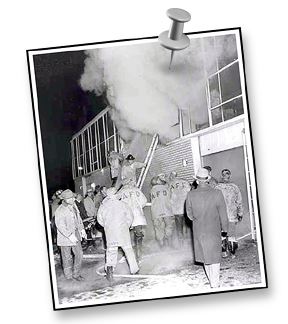 Loss of civilian lives and property from fire increased, as did Arvada's growth during the 1960s and 1970s. A commercial business fire in 1968 claimed a civilian's life, as did a house fire on September 28, 1977.

Fortunately, no lives were lost during an incident on December 4, 1978 when flaming drums of combustible liquids were hurled hundreds of feet into the air during explosions at the Thoro Products Company Fire. Some west Arvada residents still recall the fiery sky during a night in which winds gusted at speeds above 100 mph.

Fire station 5 (8100 Vance Drive), Station 6 (6503 Simms Street) and Station 7 (9190 W 84th Avenue) were constructed as the city expanded north and west during the 1970s. Chief Matt Kramer, Sr. headed the department during much of the decade that recorded substantial growth and improvement.

Kramer's eight-year term as Chief was proceeded by that of Dale Penn, who served from 1967-73. Kramer and Penn are regarded as two of Arvada's toughest and most effective Fire Chiefs. 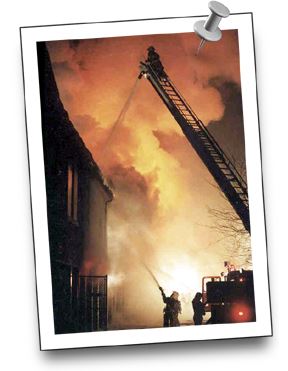 The department's eighth station and training center was put into service on January 1, 1980. Taxpayers in the fire district approved a $1.5 million dollar bond issue to construct the facility, which is located at 6651 Indiana Street.

John Dienst, Lynn Sellers, Terry Hoy, Sam Gillan and Bob White each served as fire chief during the 1980's. It was during this time that fire crews witnessed more civilian fire deaths than that of any other generation in the department's history. Seven civilians lost their lives in residential fires that occurred between 1981 and 1989. The cause of all but one of the deadly fires is recorded as careless smoking, and the remaining cause is listed as child playing with lighter.

David J. Eisenbeisz and Charlie Johlgren each represented the department as fire chief between 1992 and 1998. During this time, the department's Internet website was launched and in late 1998, the department's first thermal imaging cameras were in use. Thermal imaging cameras enable firefighters to see through smoke and are among the most significant fire service innovations to arise during the 20th century, topped only by the development of motorized fire apparatus and self-contained breathing apparatus.

On January 24, 1994, AFD firefighters rescued 36-year-old Manuel Herrera and his sons, 7 month-old Sean and 2 year-old Manuel Jr., from their burning third-floor apartment at 6429 Quail Street All three sustained critical burns and were unconscious when firefighters arrived. The family returned to Fire Station 6 to thank the firefighters who saved them after the boys spent a month in Children's Hospital recovering from burns. The Herrera fire was one of two 2-alarm fires in the Arvada Fire Protection District that day.